Air pollution kills around 2.4 million people per year globally as per the World Health Organization (WHO) [1]. And, the transport sector is the number one source of air pollution in urban areas across the world [1].

Automobiles are an integral part of our present-day lifestyles. And because catalytic converters significantly cut down automobile emissions, they too are an inseparable element of our daily routine.

Increasingly stringent standards on automobile pollution were the primary reason for the materialization of catalytic converters in the 1970s. Half a century later, the same factor continues to push ahead the global catalytic converter market, which Grand View Research expects to be worth $273 billion by 2024 [2].

Oxidising CO to Carbon Dioxide (CO2) is among the primary actions of converters. Now, CO2 is a Greenhouse Gas (GHG) that contributes to Global Warming. Even without converters, the CO from automobile exhaust will eventually oxidise to CO2 [4]. Converters only speed up the conversion and minimize the local effects of CO. 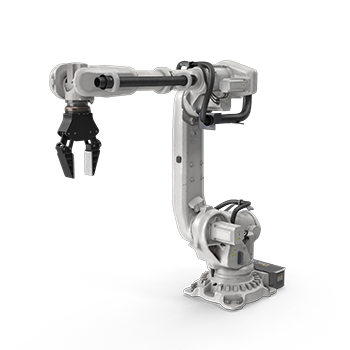 The future
of automation is here.

Deteriorating air quality prompted legislative and regulatory actions in the 1970s. The United States Congress passed the Clean Air Act in 1970. Then, the Environment Protection Agency’s (EPA’s) 1973 directive made catalytic converters mandatory on all cars made post 1975 [10].

Located between the engine and the muffler, the catalytic converter consists of an outer shell that supports a metal or ceramic substrate [11]. A blend of precious metals such as Platinum, Rhodium, and Palladium along with oxides such as Ceria and Alumina are coated on the substrate [12].

Catalysts speed up a reaction without actually participating. Catalytic converters employ precious metals to transform pollutant gases into safer, non-toxic gases but do not take part in the reaction.

Control systems are essential for three way catalytic convertors to maintain air-to-petrol mixture ratio between 14.6:1 and 14.8:1 [3]. This range is around the stoichiometric air-to-fuel ratio of 14.7:1 [5]. Three way converters evolved only with the following technology breakthroughs [13]:

Three way catalytic convertors cannot use leaded gasoline as lead residue covers the metals in the convertor and prevents it from facilitating the oxidation and reduction reactions [14].

Two Way Convertors: Can only oxidise CO and HC. These are attached to diesel engines, which use lean mixtures and leave surplus oxygen in the exhaust [1]. This disallows the reduction reaction as any reducing agent will react with NOx only after reacting with the existing oxygen. With only oxidation possible, three way convertors cannot be used for diesel exhaust [12].

Light Off is the temperature (2500C to 2700C) at which the monolith starts functioning. Automobiles attain light-off in some seconds from a cold start. Short journeys are an issue because the converter may not reach the light-off, releasing untreated pollutants. Pre-converters quickly attain light off and enable the main converter to do the same [5].

Converter Failure can occur due to a host of conditions, most of which disturb the air-to-fuel ratio. These conditions include [5]:

Cybernetik has provided customized and turnkey automation solutions to the automobile, food, and pharmaceutical industries since 1989. Starting from definition and design, our technicians proceed to deployment and support for a seamless and professional experience.

Complete traceability is the foremost advantage of CTPL’s process solution. Each operation on every part is checked and the relevant data recorded for real time access, monitoring, and control. Other benefits are:

Electric vehicles with minimal or zero tailpipe emissions are an important factor that may restrict the growth of the catalytic converter market in the near future. However, insufficient charging infrastructure means it will be a while before electrical vehicles occupy centre stage in the world of automobiles.

Write to us at sales.automation@cybernetik.com or call us at +91 20 6790 9600 for all your automation requirements.