Better comprehension of aerodynamics and development of superior materials during the late 20th century revived the utility of windmills for harnessing wind energy. Their traditional applications were water pumping and corn grinding [1].

Government policies in many parts of the world favour wind electricity as a means to cut greenhouse gas (GHG) discharges and water use by the power industry, diversify power generation sources for better price stability over the long term, and technological advancements to boost global competitiveness [2]. 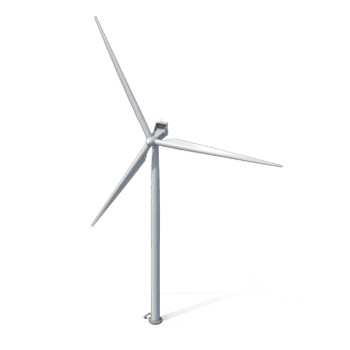 The future
of automation is here.

In many countries, wind power has achieved or exceeded grid parity wherein generation costs equal or are less than that from conventional sources [2]. This is welcome news for a world looking to cut carbon emissions to counter the menace of Global Warming and Climate Change.

What makes this critically significant is that the other two applications of energy viz. transport and heating are particularly tough to decarbonize. With renewable sources available, electricity is easier to de-carbonize. For example, renewables plus nuclear sources provide 36.7% of the world’s electricity but only 15.7% of the global energy [8].

Efficiency and better controllability make the three-blade HAWT the industry standard. And with its global supply chain firmly entrenched, it will continue to be so for the near future. However, HWATs are hyper sensitive to alterations in blade design and profile [1].

Rotor speed is hard to control in vertical axis wind turbine (VAWT). This variant also suffers from low tip speed ratio. Improvements however can make the VAWT more useful in the future [1].

For more than one reason, three is the optimum number of blades for the HAWT [1]:

Horizontal axis wind turbine (HAWT) faces the wind. It is the relative wind i.e. wind incident on the turbine blade that produces the Lift and Drag forces. The resultant of these forces has a component Thrust that helps rotation and Reaction that opposes rotation [1].

Defining the theoretical maximum efficiency (59.3%) of wind turbines is the Bertz Limit or Power Coefficient CP equalling 16/27 or 0.593 [1]. Actual efficiency falls below this number due to:

Methods to boost efficiency include:

Following are the factors, some of which involve trade-offs, that determine the cross sectional geometry of the blade [1]:

Pitching is the deliberate changing of angles of attack by twisting the blades along their length. This lowers or boosts lift respectively during high and low wind conditions [1]. Pitch drive is located in the hub. Rotation plane and chord line are separated by the pitch angle [12]. Yaw drive rotates the hub along the vertical axis to keep it facing the wind.

Primary conditions factored in when understanding loads on blades are:

Under these conditions, following loads are important [1]:

Centrifugal and gravitational loads are crucial for turbines of or above 70 m diameter, slight for rotors up to 20 m, and insignificant for rotors of 10 m or below [1]. Blades that can resist these three loads can endure the following two minor loads [1]:

Fastening the blades to the hub is a skilled operation that requires precise machining to maintain the structural integrity of the turbine in view of the colossal loads we have noted earlier. Besides, this fastening has to be such that it does not interfere with pitching that has a direct impact on turbine efficiency.

Diameters of the turbine blades at the root end, where it attaches to the hub, are considerable – of 3 meters or more. The intersecting surfaces are sawn off and / or milled followed by removal of the sawn off ring. For accurate and robust fastening, both axial and radial bolts are inserted into purpose drilled slots. This complicates the operation.

Customized automation can handle the involved challenges via:

Wind generates the most renewable electricity globally after hydroelectricity [5]. The world added 93 GW in 2020 making it the best year for the worldwide wind industry, marking a 53% rise year-on-year. This will still be inadequate to reach net zero emissions by 2050 [4]. More wind turbines with superior designs is one way to reach the target.

Cybernetik is a 30+ year old Indian automation company that has successfully designed a number of bespoke systems.

Among these is a Robotic Windmill Blade Machining System we designed for an industry leader. The system replaces traditional special purpose machinery (SPM) with robotic automation to seamlessly handle variations in blade diameter, reduce cycle time by 50%, eliminate rework, and improve accuracy.

Write to us at sales@cybernetik.com to know how we can add value to your manufacturing plant.